Free Fire MAX is designed exclusively to deliver a premium gameplay experience in a Battle Royale. Enjoy a variety of exciting game modes with all Free Fire players via exclusive Firelink technology. Experience combat like never before with Ultra HD resolutions and breathtaking effects!

Play this game on PC with a bigger screen, flexible keyboard, and mouse control with NoxPlayer!

How to Play Free Fire MAX on PC with NoxPlayer?

Since Free Fire Max is the enhanced version of Free Fire, it will have better graphics than the latter. Free Fire Max will have “Ultra HD resolutions and breathtaking effects” as written in the Google Play Store description.

To play the game on PC you’ll need a more stable and compatible emulator that supports higher graphics and heavier games, NoxPlayer would be your perfect choice! NoxPlayer is the first emulator to release the Android 9 beta system, which supports games like Genshin Impact and The Rising of the Shield Hero that are only available on Android 8 or higher.

Find Multi-Drive on the toolbar 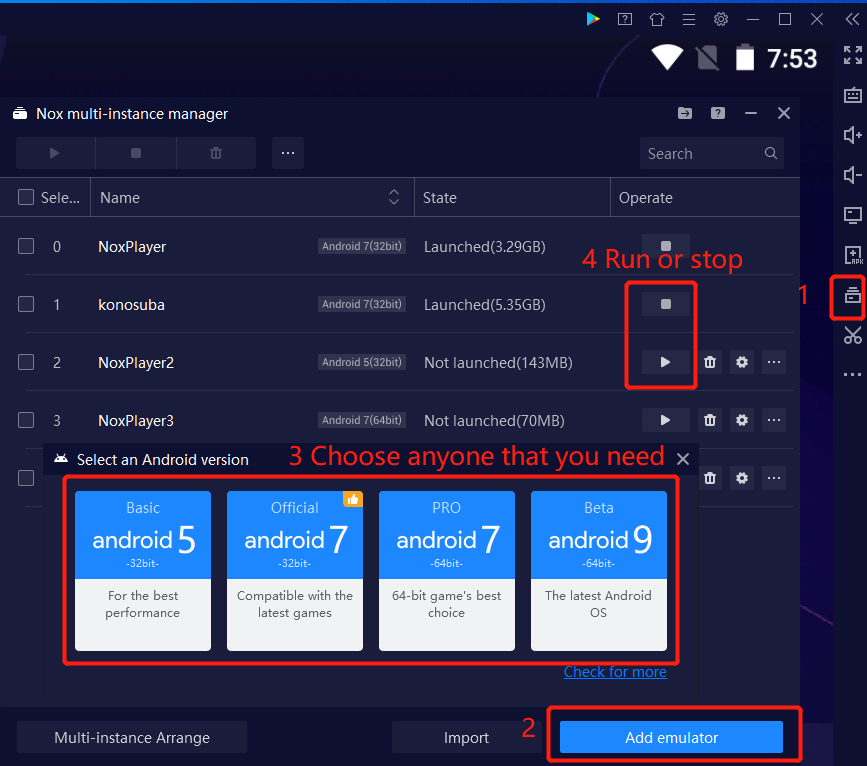 NoxPlayer is the only emulator so far that supports all kinds of Android and bit versions.

2. Look for Free Fire MAX in the Google search bar.

If you cannot find the game using the search bar:

You could add a new Android 9 emulator instance in Multi-Drive using the method above, and find it in Google Play Store (In the Tools folder). 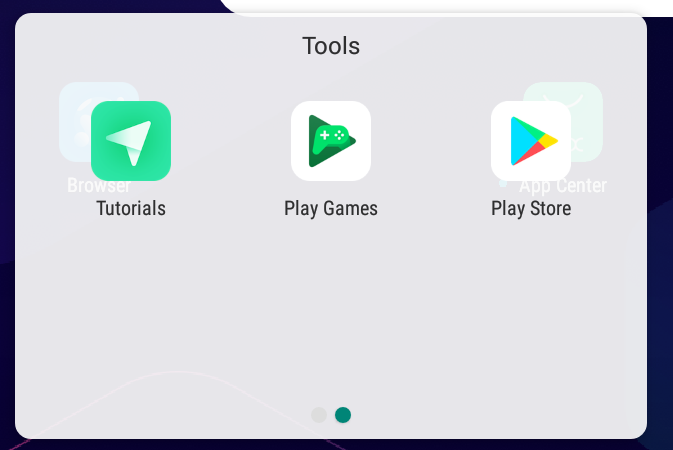 Or you could install the game by drag-and-drop its APK to NoxPlayer. 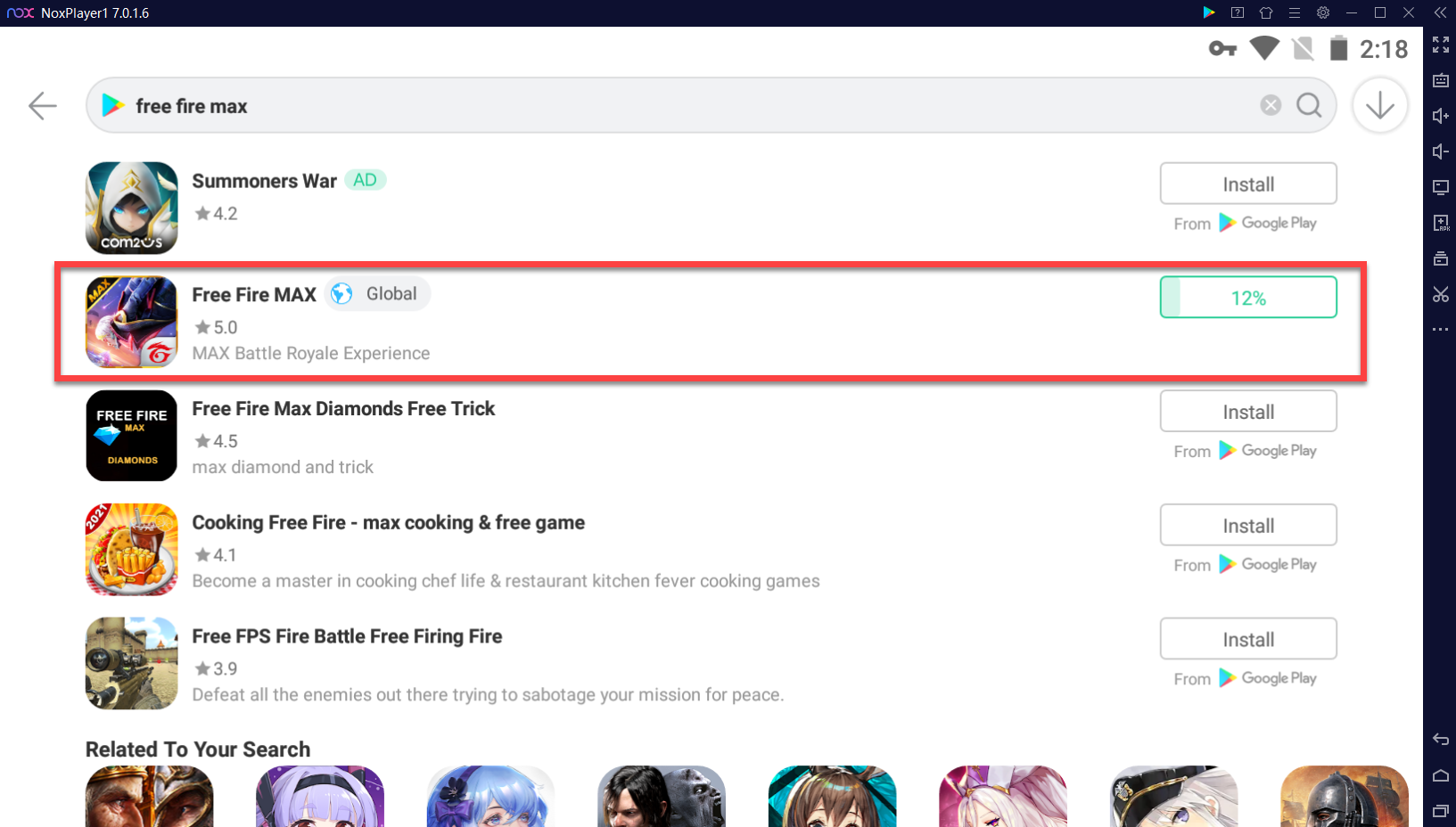 4. Now you could enjoy the game by clicking its icon. 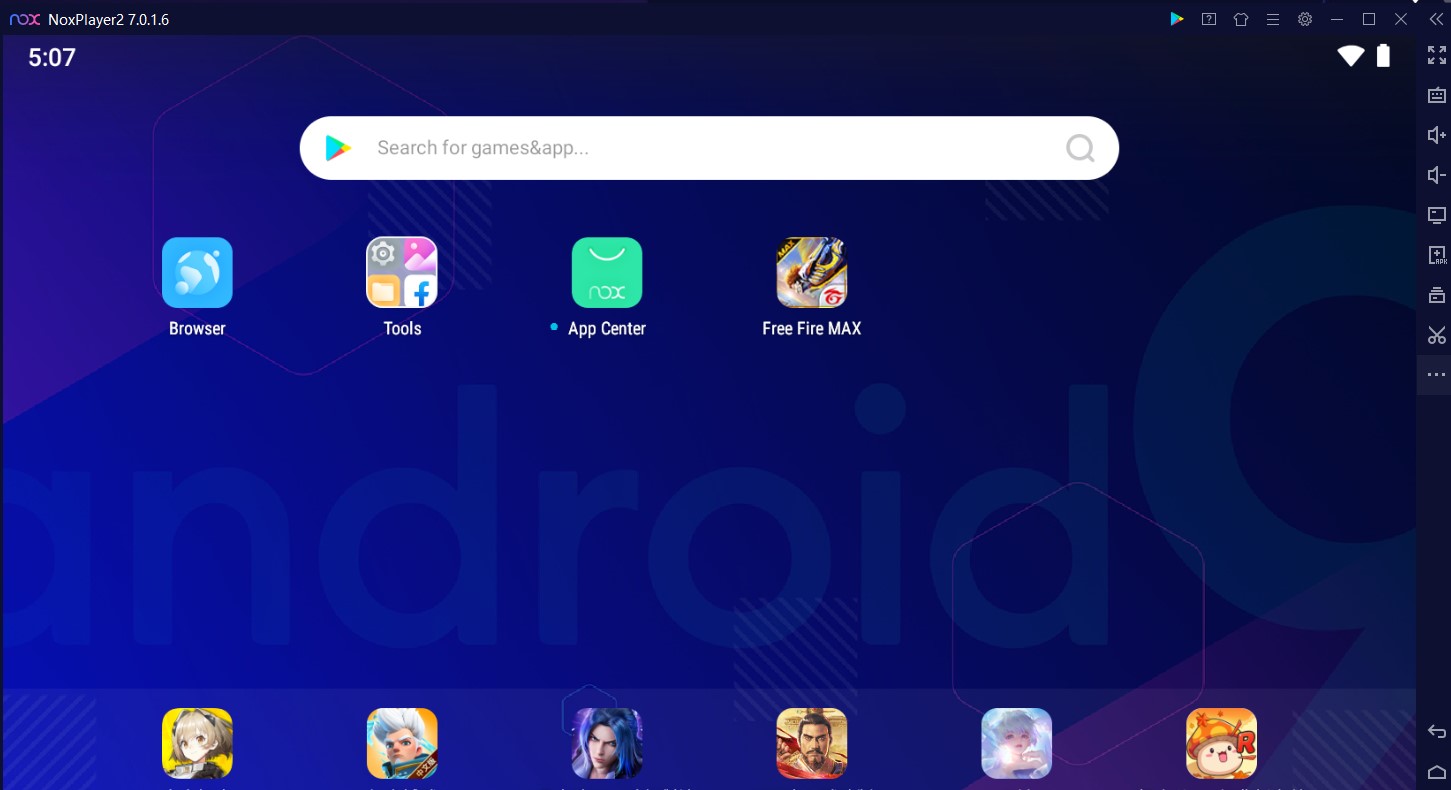 For FPS games like Free Fire MAX, it’s best to play them on PC with a bigger screen, keyboard, and mouse control. NoxPlayer provides a set of keyboard mapping for users to control the game more simply and conveniently. There are 12 keys totally in the keyboard configuration for view control, moving directions, attacks, skills, and such. They can be applied to different games according to your demands.

Usually, we have a default keyboard mapping for each game but you could always set your own keys with the Keyset option on the sidebar.

You could check our tutorial if you want to know more about how to set the keys and what they are for: Keyboard mapping on NoxPlayer 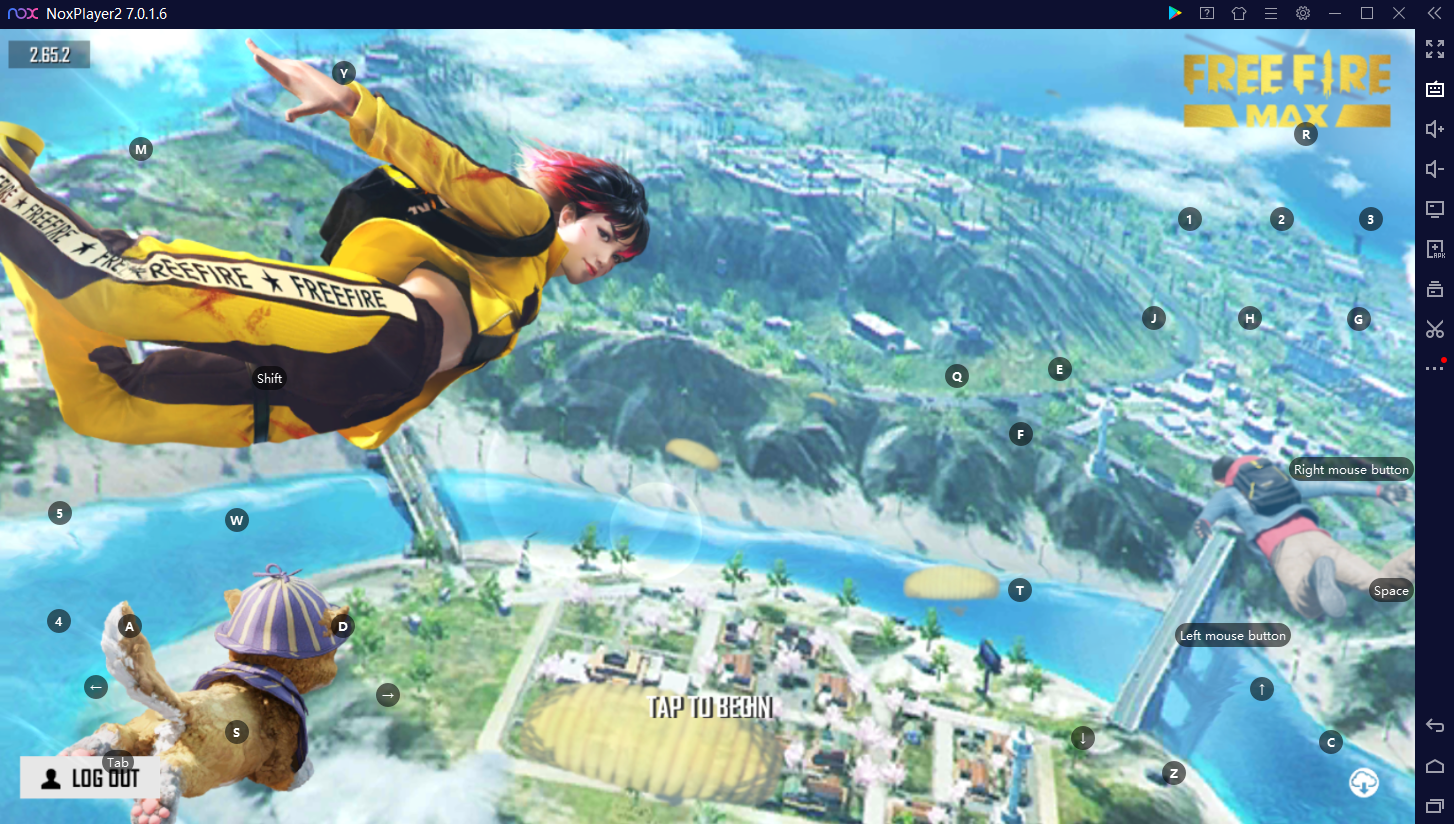 Other Features of NoxPlayer

If you want to play Android games on PC or Mac, you’ll need an emulator. NoxPlayer is one of the best Android emulators you can get. It is easy to set up and use and is compatible with a majority of mainstream games so you don’t have to worry about performance.

Using an Android emulator in 2021 is about more than just running games. That’s where NoxPlayer has you covered. It has some cool features like in-built Google Play Store, multi-instances, and multiple Android version support. So here are the top 5 features of NoxPlayer that make it one of the most sorted Android emulators for PC and Mac.

One of the essential features of Android emulators is the presence of a rich app store. While NoxPlayer has its own app collection, it also comes with a built-in Google Play Store (You could find it in the Tools folder). This means you can easily download and run Android games and apps on your Windows PC or Mac.

If you don’t want to use the Play Store option, simply search for a game in the search bar on NoxPlayer and click on it to start playing.

This is one of the top reasons to use an Android emulator and NoxPlayer nails it. For the uninitiated, key mapping assigns keys from your keyboard to replace the game’s original controls. For games like Free Fire MAX, you can map the arrow keys or any other keys (WASD, IJKL, etc) to replace the on-screen movement controls.

If you’re a seasoned player, you can custom map the keys as you want, and if you’re new or just taking it easy, it offers you recommended keysets so you can dive right into the game.

Some games didn’t make it to the newer Android versions and some don’t run on the older ones. NoxPlayer supports multiple Android versions for different game requirements. You can run Android 7 or Android 5 depending on what you want to run. You can play mobile games of any Android or bit version by simply adding a new emulator in Multi-Drive, user-friendly for both pro-gamers and noobs! NoxPlayer is the ONLY emulator so far that includes Android 5/7/9 & 32/64 bit at the same time in ONE emulator installation pack. 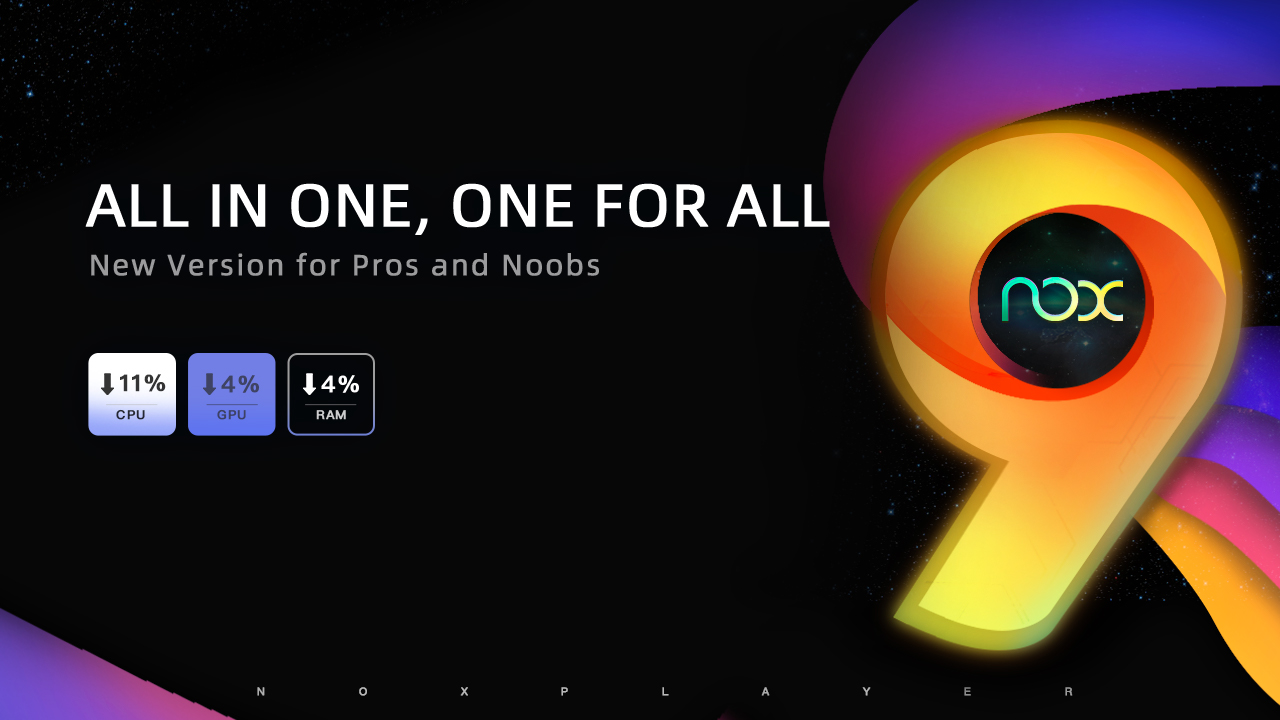 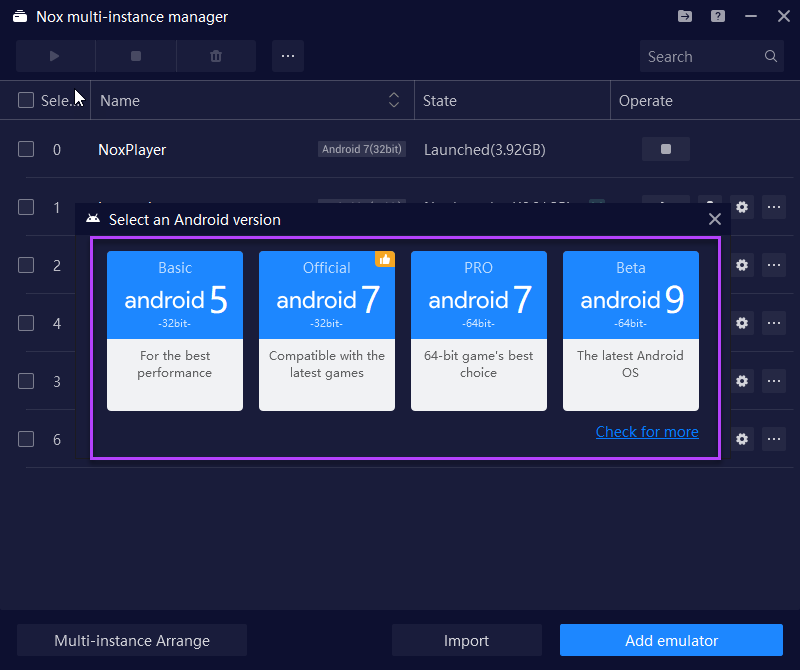 Multi-Instances on NoxPlayer is one of the handiest features on the emulators. Using this feature, you can run two or more emulations at the same time. Combine this with the multiple Android version support and you can basically play a timeless classic on Android 5 while running Instagram on Android 7 side by side.

Lastly, NoxPlayer for Windows and Mac has excellent app and game compatibility. Mainstream games like Among Us, Arknights, Cookie Run, PubG, Grand Cross, and others are compatible with this emulator. Better compatibility means a smoother experience, more games and apps to play, and better performance on PCs with lower specifications.