You run across the obstacle course, breaking every social distancing law in existence. You watch as ten people at once get sent into the stratosphere by a giant pillow hammer. You laugh. The finish line is in sight, you can almost taste victory. Then some good-for-nothing jerkwad gets in your way and pushes you off the cliff. You throw your tablet at the nearest wall, obliterating both the wall and the tablet in your anger.

Is this a familiar experience for you? If so, you’ve come to the right place! Welcome to our Stumble Guys guide. Similar to physics-based racing elimination multiplayer games such as Fall Guys, in Kitka Games’ latest mobile title called Stumble Guys, you find yourself competing against 32 players either to survive the level or make it to the finish line. This game is very simple, yet highly frustrating. We’re here to give you some useful tips and tricks for winning the game. You’ll need it to avoid a rage-induced aneurysm!

What makes Stumble Guys enjoyable is that it’s not a very addicting game, and it has great gameplay that’s enough to get you hooked. It’s more of a stress buster game, perfect for times where you want to get a rest from your job. Plus, the game is not that long either. So you can play multiple rounds without wasting your whole day playing it. Finally, for those who love skins, you can get them each time you watch ads. Aside from new skins, you can also get gems from post-game ads.

You can use the gems to purchase the Stumble Pass, which allows you to use the Punch emote. It’s more than just an emote, though, because you can use it to knock your opponents back. There are also different arenas and maps, but sometimes it can be repetitive. Hopefully, they add new maps and arenas soon, especially since the game is gaining traction as the days go by.

In Fall Guys, players can not only jump and dive but also grab and pull other players to disrupt their movement. In Stumble Guys, while not immediately apparent, the players can also perform certain actions to disrupt their rivals during races, and possibly cause them to tumble down into the void, or at least to lose their lead. Learning about these actions is pivotal as it will help you to get the upper hand, or even eliminate the most dangerous rivals early on, giving you a clear shot for the win.

There are two special actions that you can perform in Stumble Guys: Punching, and sweeping. The first is your regular strike that can push enemies and even knock them back considerably if you do it right. Meanwhile, the second works as a way to dive down and sweep forward a short distance, possibly helping you to catch up to running enemies, and even knock them down if done correctly.

The controls show a joystick at the left side, along with a jump button and speech bubble emote button at the right side. You should be familiar with this if you’ve played any platformer game at all on any tablet. What the game doesn’t tell you is that swiping your thumb or finger on the right half of the screen allows you to control the camera. This is especially useful in maps like Stumble Soccer, where you will find your camera often pointing away from the ball you need to find.

The game is nice enough to reward you with a free skin everyday. You just have to watch five ads to get it. The game also occasionally gives you a gem reward after a match, no matter how poorly you did. You have to watch an ad to get it too. The free skins are forever, though the gems are limited to 50 videos total, counting both shop videos and post-game videos. If you want to make the most of it, you should get only the post-game ads, since the shop ads only give 8 gems per ad instead of 10. 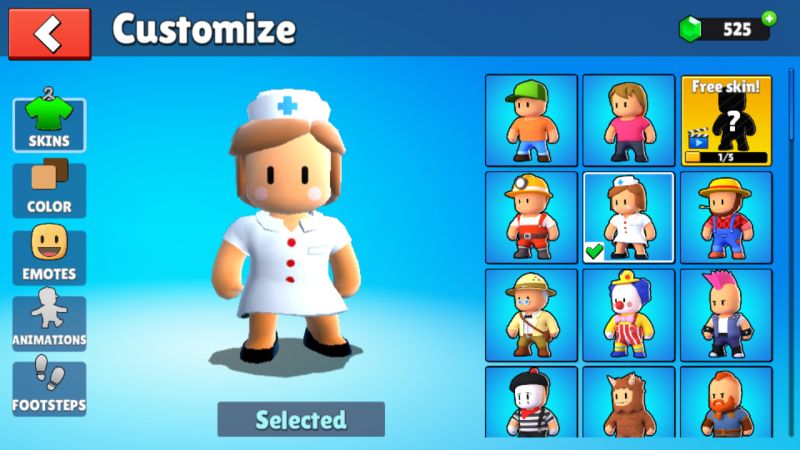 Resist the urge to immediately buy random skins with your gems. Save for the upgraded Stumble Pass. This allows you to unlock the Punching emote at the very end, which is more than an emote. You use it to punch players and do actual knockback against them. You can pay gems for it rather than real money. While this is a long grind, it’ll be worth it since you’ll be getting a skin every day anyway for free. Might as well make the most of the gems you do get instead of buying random skins with them.

Unfortunately you only have a total of 50 ads worth of free shop gems to watch. That adds up to half of what you need, and the rest you’ll either have to pay for, or get from giveaways or tournaments. You can get those by joining the Discord server for the game, which you can find the link for in the News section of the Main Menu. 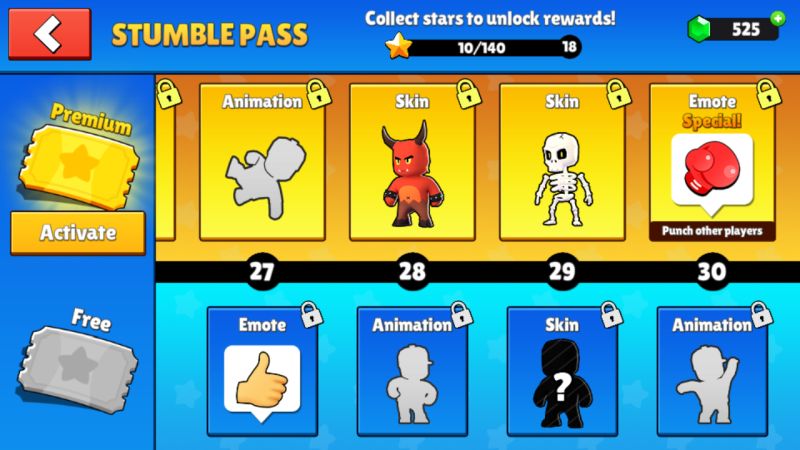