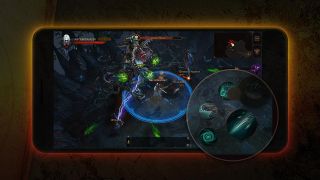 While Diablo Immortal retains the action role-playing elements and isometric perspective synonymous with the series, what sets it apart from its predecessors is that it’s a free-to-play, mobile-based MMO, and is therefore structured to accommodate that style of gameplay. Blizzard has confirmed that while the game will have dungeons not dissimilar to those found in the PC and console games, they will be quite a bit shorter, averaging 10 to 15 minutes in length to make them more digestible for mobile players. The studio also confirmed that much like World of Warcraft and other MMOs, you will be able to see other characters on the map and use voice chat to communicate with friends, adding a new level of interactivity to the series. Lastly, Immortal has also done away with the series’ mana system in favor of a cooldown system that’s more in line with traditional MMOs, but promises it will never turn to an “energy” system that limits the amount of free play time a person can sink into the game in a day–a frequent complaint with mobile games.

Upon starting Immortal, players can choose from six returning character classes, each with 12 unique skills to unlock: barbarian, wizard, monk, necromancer, demon hunter, and crusader. Throughout the campaign, players will gain experience points that allow them to increase their level up to the game’s current level cap of 60. Once they hit level 60, you can then achieve “paragon levels,” which can be invested into four different skill trees: survivor, treasure hunter, vanquisher, and gladiator. Blizzard has already confirmed it plans on increasing the level cap, adding even more abilities, and implementing battle passes in the game as well.

While the core of Immortals is single-player, it also boasts several multiplayer activities as well. Players will be allowed to join up in parties of four to play through “dynamic events” together in order to take on tougher dungeons and earn better loot. The game also features PvP modes, including a basic eight-vs.-eight Battleground mode and the Cycle of Strife, a vVP system open to players who have reached Immortal’s endgame. 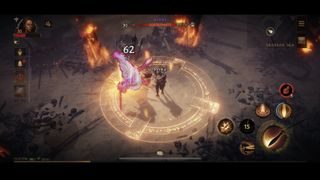 Diablo Immortal inherits a lot from Diablo 3, including destructible environments, several classes (think Crusader or Demon Hunter), and the endgame procedurally-generated Rift dungeons. While Immortal’s stages and enemies are vibrantly colored, the developers seem to have kept their word in dialing down the tone to a dimmer, bleaker standard set by Diablo 2.

To be specific, the Diablo Immortal button layout looks a lot like those on League of Legends: Wild Rift and other smartphone MOBA games: a floating directional pad on the left, a big attack button on the right and smaller ability buttons fanned around it. If an ability calls for directional control, you’ll be able to hold the respective button down to aim a highlighted arrow (or cone or lane or whatever shape the ability takes) and let go to let fly.

These touch controls are obviously less precise than a mouse and keyboard, and it’s not clear at first that there really isn’t a way to target individual enemies. Admittedly, the screen is small, and can get cluttered with buttons, names, loot, and vendors, though mostly while in town (see screenshot below). You can download NoxPlayer to play Diablo Immortal on PC with a bigger screen, keyboard, and mouse control!

The controls are simplified such that attacks auto-target the nearest enemy or whichever foe you’re moving toward, which is a crude yet effective enough way to get a modicum of precision in a game so tuned to churning through masses of enemies. Tapping and holding ability buttons projects a highlighted pathway from the player character’s feet, allowing players a bit of aim. And don’t worry about mana – every ability in the game simply works off cooldown.

Much like they were in Diablo 3, the Crusader is a tanky melee class with damaging abilities mostly centered around the player – the first one they start with, Sweep Attack, is a hemispherical arc that gets bigger as the player holds down the ability button (and the Crusader winds up their magical flail for a wider swing).

Other signature abilities return, like Falling Sword (toss a sword into the ground for small AOE damage, tap again to teleport to the sword) and Draw and Quarter is a reworked version of Steed’s Charge from Diablo 3 that chains nearby enemies to drag behind the player while they slash on either side.

How to play Diablo Immortal on NoxPlayer

3. Look for Diablo Immortal in the search bar and install the game

4. Click the icon of Diablo Immortal on your home screen to start the game 🙂