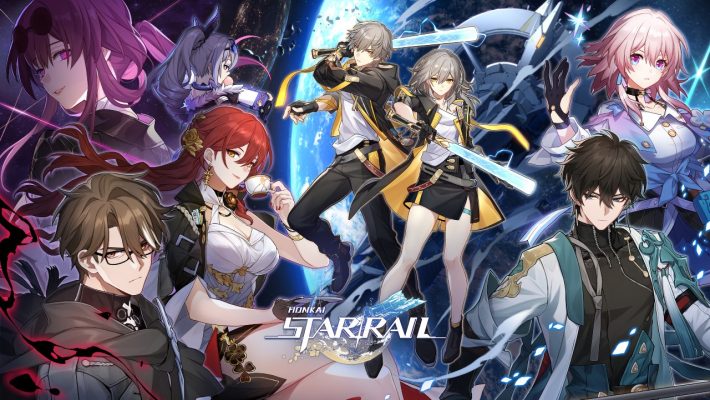 HoYoverse released official gameplay during the “Next Stop, the Stars!” reveal trailer. The footage gives players a sneak peek into the game’s turn-based combat system, showcasing a number of flashy ultimate abilities and attacks.

The gameplay trailer also revealed a key location from the game, giving us a glimpse of a sprawling metropolis. This place appears to be filled with narrow streets, towering buildings, and gigantic cogs that provide power to the buildings around them.

While the anime aesthetic will be familiar to fans of Honkai Impact and Genshin Impact, the turn-based combat will provide a twist to enemy encounters.

Himeko: An adventurous scientist who encountered the Astral Express as a child when it got stranded in her home world. At that time, some existence in the Express revealed to this young girl a whole world outside of her own — the universe. Years later, Himeko finally repaired the train and began her journey to the stars, but she realized that this was only the beginning. On the Trailblaze path, she would need many more companions… Even though such companions may have different destinations in mind, they all gaze at the same starry sky.

Welt: The wise and sophisticated former Anti-Entropy Sovereign who inherits the name of the world — Welt. He has saved Earth from annihilation time and time again. After the calamity ended, the heavy burden ordained by fate to Welt had been removed for a time, and he became an animation storyboard artist. However, after the conspiracy with St. Fountain came to a close, Welt had no choice but to venture with the initiator of the incident to the other side of the space portal. Perhaps even he didn’t expect the new journey and companions that awaited him.

Danheng: A cold and reserved young man who wields a spear known as Cloud-Piercer. He acts as the train’s guard on its long Trailblaze journey. He carefully observes the changes in everything around him, albeit with a calm demeanor that may appear to be indifference. He faithfully records everything they encounter on the Trailblaze path in the Express’s archives. Danheng never talks much about his past. In fact, he joined the crew of the Express to escape from it. But will the Express really be able to take him far away from his past?

March 7th: A clever, quirky girl who is enthusiastic about all things girls her age are enthusiastic about. She travels with the Express, always bringing along her camera with the belief that one day she will be able to take a photo of something related to her past. She was found in a piece of drifting eternal ice and freed by the Astral Express Crew. When she awoke, she couldn’t remember anything about herself or her past. Though initially feeling dejected about this lack of identity, she decided to name herself after the date of salvation. And thus, on that day March 7th was born.

Gepard: An upright and noble captain of the Silvermane Guards who bears the name of the age-old Gepard family. In the blizzard-battered city of Belobog, defense is much more challenging than attack. Gepard and the Silvermane Guards he leads serve as the unbreakable iron defense of the Union in this hostile world. Sometimes he is ridiculed by his sister and aide for his ever-scrupulous manner, but no one can deny that the people of Belobog have been able to maintain peace and comfort even with eternal winter on its doorstep… With Gepard’s protection, the city can carry on with its ordinary daily routine.

Seele: A spirited and valiant member of Wildfire who grew up in the perilous Underworld of Belobog. She is accustomed to being on her own. As someone who once relied on others for protection, she now pursues strength. For the truth of the underground and her family’s name, Seele can endure any kind of adversity. The protectors and the protected, the oppressors and the oppressed… The world Seele grew up knowing was just a simple dichotomy… That is, until that young girl appeared.

Clara: A shy young girl with no home, Clara had no choice but to join the prospectors to survive. She inadvertently reactivated a dormant relic from a past civilization — the robot Svarog. “To have a family.” This is Clara’s response when asked what she wishes for most. Before long, the usually self-servicing prospectors were united as one under the leadership of Svarog. Around the same time, a mysterious prospector was spotted in the Fragmentum, a red-hooded specter adept at retrieving rare relics from the most dangerous places. Terrified prospectors call this ghostly figure… the Bloody Rabbit.

Asta: The Lead Researcher of the Space Station brims with enthusiastic curiosity and boasts unimaginable achievement in the field of astronomy. She is capable of taking on workloads meant for dozens of people with ease, including commanding and maintaining the Space Station. Despite her outstanding work capabilities, she is completely incapable of looking after herself. This doesn’t bother her one bit, though; in fact, she even uses it as a point of pride and proof that she has distributed the workload to the Space Station’s staff reasonably. “I manage the Space Station, and Arlan manages me. What’s wrong with that?” It is then that people are reminded that Asta is a young lady of a distinguished family.

Hook: Hook is the boss of The Moles adventure squad.

As we stated earlier, Honkai: Star Rail includes returning characters from Honkai Impact, as well as some new, yet familiar ones. As a result, those familiar with the action anime game will notice a lot of crossovers.

While the characters may be familiar, it is important to note that Star Rail is set in a separate universe. This ultimately enables the developers to create new stories without having to tie them into the events of Honkai Impact.

How to Download and Play Honkai: Star Rail on PC