Ever since Microsoft rolled out its Windows 10 Creators Update since April 2017, many of you may find that your NoxPlayer does not work anymore and be prompted with the below compatibility message: This app can’t run on this PC. Nox App Player doesn’t work on this version of Windows. An updated app may be available. 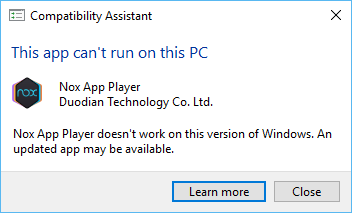 This is because you are on an older version of NoxPlayer which was released before the Windows 10 Creators Update. We’ve improved Nox’s compatibility with Windows 10 update in all later versions. So if you are having this issue, simplely download and install the latest version of NoxPlayer from our official website will solve it. Get the latest version now: https://www.bignox.com/